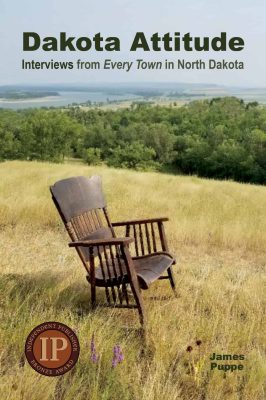 The 617 stories that make up Dakota Attitude come from Jim Puppe’s treks to every North Dakota town and his interviews of residents in each. These stories, told in North Dakotans’ own words, reveal a spirit of resilience—a Dakota attitude—personally conceived, adopted, and applied during each storyteller’s life. Whether the stories evolved while fighting on foreign shores, facing bad crops or weather, surviving tragedies, or pursuing (and achieving) dreams, reading them will inspire, enlighten, and entertain.

In Their Own Words:
North Dakota's Past, Present, and Future

When you talk to more than a thousand people in the course of 617 interviews, you hear a lot of good stories. Like how one man discovered his future wife after she pulled a rabbit out of a hat at a magician show. We offer just a few of the stories here as a window into the rich storytelling found in Dakota Attitude.

Those Who Survived Anzio Will Go to Heaven
A Telegram from the War Department
.
Remembering a Fallen Son
A Former POW Cherishes Freedom
“You Can Always Change”
Selling Beer at 10 Cents a Bottle
He Learned from the Bums
Twenty-One Children in 21 Years
“Sorry” Doesn’t Cut It
Survivor of D-Day on Juno Beach
POW: “The Greatest Sight I Ever Saw”
You Have to Be Compassionate
Awestruck by the Beauty
Previous
Next
Read More Stories

I live in an assisted living facility with my husband in St. Joseph, MN. We were both born in ND, he in Valley City and I in Dickinson. Jerry has chronic pain from arthritis and today I told him he needed a Dakota Attitude, which inspired my daily haiku: Grit and gratitude / A Dakota Attitude / Make the best of it
Juliana H.
I’m a physician in Fargo, ND. I like to thank you and congratulate you on writing a great book. Apart for knowing more about ND with the help of your book, it helps me in my practice. Before I go to see my patient, along with his or her medical history I read that page of your book where they are from. They feel so happy that I even know their small town and my doctor-patient relationship goes very high.
Dr. V.G.
Linton, Strasburg, Westfield, Hull, Ashley, Zeeland, West Fargo, McCluskey, Hazen and others [hold] memories. Your book is another example of the rewards from persistence and effort. Congratulations on the successful book!
Allen VB
Your book is absolutely my #1 pick. You are not only so very clever but also such a great detective to find such interesting stories. Thank you again! You sure know how to pass along a thoughtful and positive Dakota attitude.
RJ
Even having read just a few, I can see that your writing style is superb. It appears you didn't write from a "formula" with one story sounding the same. And your titles are clever. Kudos to you and Sharon for all the miles and effort you put into making this dream a reality!
Susan M.
I have your book in my classroom to read during our 10 minute daily independent reading time. I've had lots of questions from students about what I'm reading, and I've shared a few passages with random classes. They've been curious who was selected from our area and if they would know them. It's been fun!
MH
Loving the book. It’s giving me a great feel for your state in a way that is unique. I’m not surprised that you won a bronze medallion, and I hope there are quite a few libraries and museums in the Dakotas that have added it to their collections - it’s a great record of life.
Greg, Australia
This book is a treasure—your interviews ran the gamut from farm life, to military service to schools, and education. I get a chuckle now and then when I see what people had to say.
Ardis, Fargo, ND
We are really enjoying the many unique stories that characterize life in North Dakota. I especially appreciate the witnesses of war and hard time so many endured. Reading "Dakota Attitude" is like reading the Bible. You pick it up, read a few pages and then come back anytime to read more. Great job.
Melvin and Luella L.
What a treasure for grandchildren of the families and others who really wanted to know what life was like during those years.
Alyce
I read the book in 5 days. The people you interviewed were the greatest Generation without a doubt. The common thread in all the interviews, was...they all had Christian values, family values, hard work ethics, community togetherness.
Gary J., Seattle, WA
We are sharing laughs as we discover a name we recognize, then read the attention grabbing titles. It’s so nice that you focused on the uniqueness of individuals and the strengths of their character.
Helen D.
We ordered one for Christmas, and much to our surprise when we got it, you interviewed my Mom and Dad for the book. We have since ordered two more copies for family members.
Don and Claire S., Indianapolis, IN
Read the article yesterday about your book and thought to myself, “I need to get a copy.” Then a recollection of my dad telling me that you had interviewed him at the farm popped in my head. Sure enough, my dad is [there]. What a great surprise... some special memories for us to cherish.
Joel H., Fargo
Just picked up the book today at the post office; we live in the country and don’t go to town every day. I can hardly wait to sit down with it next to the wood stove and meet all the people! Thank you for what I know will be hours of entertainment!!!
Leslie K.
Enjoying reading your book. Am thinking of e-mailing my kids & grandkids canceling Thanksgiving Dinner - want to just sit & read, but I don’t think that would go over to well. Ha Ha
Flossie
Previous
Next

This book is dedicated to all North Dakota service men and women who died fighting for our freedom, including Jim’s dad’s first cousins, brothers Lester and Elmer Puppe, from rural Hensel.

These two died in combat just 69 days apart following the amphibious and air assault of southern Europe during World War II. Lester was killed by small arms fire near Brolo, Sicily, and Elmer died of shell fragmentation wounds just north of the Volturno River in Italy.

The Puppe brothers are buried at the Sicily-Rome Cemetery, Nettuno, Italy, amongst 7,856 other American military war dead who gave the ultimate sacrifice—their lives for the free world. This cemetery also has a memorial to 3,095 other Americans missing in action from World War II. Over 200,000 people visit this military cemetery annually.