“You Can Always Change”

Sharon Red Fox Georgeson, a full-blood Sioux, was born in 1940 in Fort Totten, “but I grew up in the Wood Lake area on the rez.” Because her dad was a minister, when she graduated from high school, Sharon’s plan was to do the same.

“I was sent to Cook Christian Training School where I spent eight years. I went four years [to] Bible college and took two years at Arizona State. Then I did some assignments out in the Navajo and Pima reservations. Mostly children’s work—Sunday school and youth work. Youth advisor.” From there, Sharon went on to seminary in Dubuque, Iowa. “Then I came back here and became the youth advisor to our church, BDecan, in Tokio. I spent 40 years there.” Sharon got two more degrees—elementary special education and social work. “I worked with children all my life.”

Sharon is ordained but doesn’t preach. “I’d rather be responsible for doing curriculum for children’s different age groups. Sunday school and youth work. That’s where I feel the Lord’s led me. I liked working with children, little children, all those years. Actually, when I retired four years ago [from Cankdeska Cikana Community College], the [Spirit Lake] Tribe did an honoring thing for me. They added up all my years working with children. It was 47 years, and I was given an honorary degree from the College.”

Sharon’s husband, Albin Georgeson, came into her life in about 1966. Together, they had two boys, plus one from her first marriage and two adopted daughters. There are now two great-grandchildren. For those and other younger people, Sharon has some words of advice: “Be yourself. Stick to what you are aware is right. Try not to follow the crowd. Success has gotta be an individual thing. That’s what you want, go ahead and go for it, stick with it, and it doesn’t work for you, you can always change. Traditionally we are good people. Just look around and help each other, love each other, and when you want help there’s always somewhere you could go get help and talk to always. Don’t feel alone, because there are people that will talk to you, and they’ll make the right referrals, if you want.” 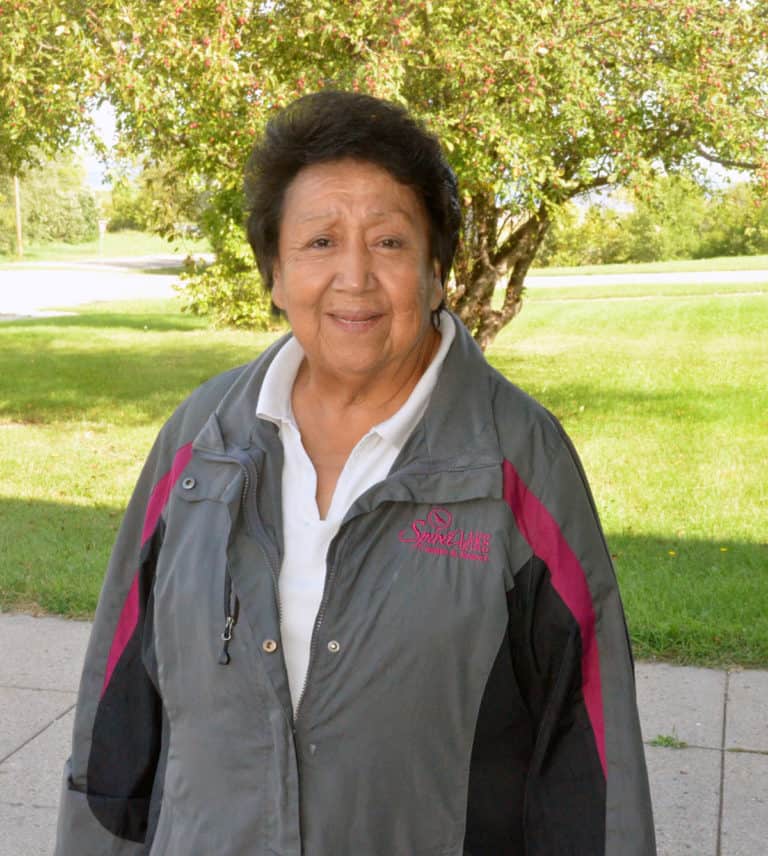