Selling Beer for 10 Cents a Bottle

Both Calvin Lettenmaier and Ilah Mae Kronebusch grew up near Sanborn, during the hard times of the 1930s—he was born in 1927 and her in 1928.

Calvin says during the probation years, “We made beer at home and sold it on Sunday. Ten cents a quart. I used to wash beer bottles. My dad put the beer in it. I put the cap on. You weren’t supposed to do it, but the people that made whiskey alcohol, they’re the ones that got 90 days in jail. My dad started making alcohol, and Mother said, ‘You better quit, because a couple of neighbors got caught.’”

When Calvin was 20 he took over the family farm, after his dad died in an airplane crash. “I had neighbors come before he was even buried. They wanted to farm it or buy it. One fellow looked over the place, told me I should paint the barn if he was gonna move in. I went in and told my mother, ‘We got some creeps out here that want to start farming.’ She told me, ‘Get rid of them.’”

Ilah Mae studied hair dressing, then returned to Valley City to work as a beauty operator. When she married Calvin in 1948, she gave up her job and moved to the farm. “It was a short career—let’s see, about 18 months. In those years, when you married a farmer…”

Calvin and Ilah Mae raised seven children. She thinks growing up in rural North Dakota gave her children an advantage over town kids. “Just your work ethic, for one thing. If we told them to do something on the farm, they went out and did it. They didn’t stand and pout and argue. They all knew how to work. I never really heard our kids say they were bored. They were either playing or working or eating or sleeping.” 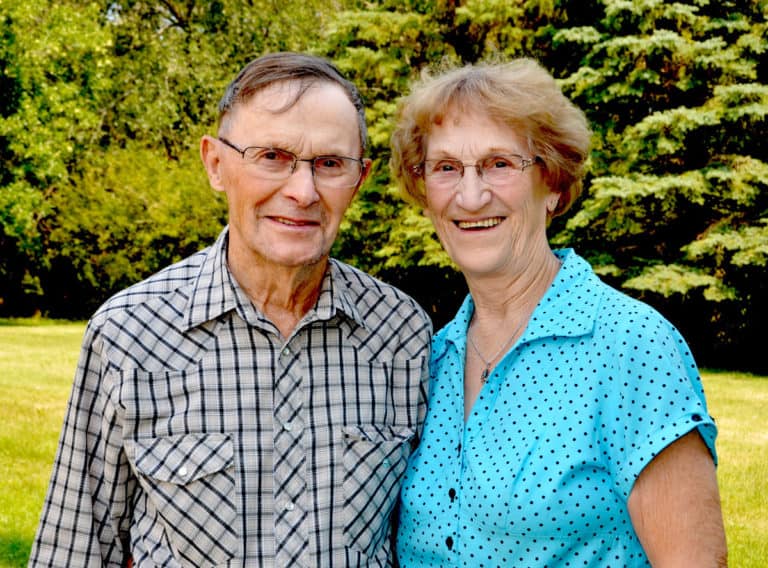